In March 2014, Caltrans established the Last Chance Grade Partnership to create an active, working relationship with the agencies and groups that have management responsibilities for lands and resources that would be directly impacted by any realignment of Highway 101 at Last Chance Grade.

The Partnership initiated an Engineered Feasibility Study (EFS) to identify potential improvement projects that can ensure the safety and reliability of the highway while protecting the area’s critical economic, environmental and cultural resources. The study is a detailed investigation that considers a full range of needs, options, ideas, opportunities, and constraints. The EFS is used as a reference document that identifies potential improvement projects, enabling Caltrans to respond to and compete for various project funding sources as they become available. The Engineered Feasibility Study was completed in 2015 and the entire study is available in the Document Library.

The next step in the process was to develop the Project Study Report. This report performs a more detailed analysis of the alternatives recommended for further study in the EFS as they relate to the cost, scope, and schedule of developing the project. During this study, alternatives and alignments were refined with more precise cost estimates along with more detailed technical analysis of proposed structures and right-of-way. The Project Study Report was completed in 2016 and the entire report is available in the Document Library.

Funding for the project was initiated in  May of 2017, when the California Transportation Commission approved $5 million for Caltrans to perform preliminary geotechnical investigations. Because the alternative routes all run through areas of historic landslides, the preliminary Geotechnical studies are needed to reveal if the alignments can be constructed as proposed or if doing so will result in the same sort of problems we have now at Last Chance Grade.

In March 2019, the California Transportation Commission approved an additional $45 million for Caltrans to complete the environmental phase of the project. These studies will help us understand if there are major environmental issues that could rule out any of the current alternatives. Tree surveys will be performed in select locations to provide estimates of impacts to old growth redwoods. Caltrans and its Partners could ultimately make adjustments to the project alternatives or even eliminate alternatives based on information provided by the geotechnical investigations and tree surveys.

Caltrans and the Federal Highway Administration (FHWA) completed an Expert-Based Risk Assessment in June 2018. The Risk Assessment informs and supports any future recommendation to approve and fund a full realignment project. The Risk Assessment was needed as a tool to help the partnership narrow down the list of alternatives by focusing only on those that meet the need of the project: to improve long-term stability. An independent team of subject matter experts used the best available information to estimate the risks associated with staying on the current alignment and the risks of realigning the highway. The Geotechnical Expert-Based Risk Assessment report is available in the document library.

Caltrans and its partners conducted a Value Analysis in the fall of 2018 that was instrumental in eliminating three project alternatives, which greatly reduced the cost and complexity of future environmental studies. The first and most important step was to hear from our many stakeholders on what they value, whether that is the longevity and stability of the highway or the protection of natural resources. In later steps, the Value Analysis team considered how to improve the current alternatives to better create value and finally presented the findings to Caltrans and its partners for consideration. Ultimately, all parties agreed that the three “C” alternatives (C3, C4, and C5) did not offer high enough value to merit further study.

Last Chance Grade is in an area prone to geological activity. In 2000, the California Geological Survey mapped over 200 active slides in the area.

More recently, surface monitoring data shows slow but steady movement of the roadway along the northern and southern sections of Last Chance Grade. The effects of this movement can be seen in the damage to the existing retaining walls.

Landslides occur 1-3 times per decade; storm events in March 2011 and March 2012 resulted in significant roadway damage requiring emergency repairs. Storm damage in 2017 resulted in a temporary loss of the southbound lane at postmile 14.4. 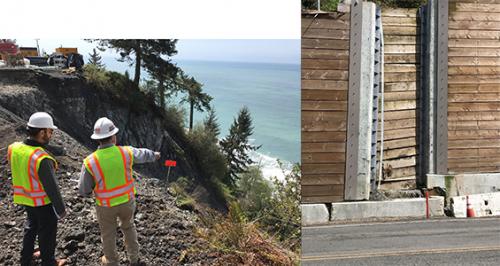 Highway 101 provides year-round access for commercial trucking and recreational traffic. Since 1997, landslide repair projects have cost over $85 million when including the estimated costs of the current ongoing work.

If Highway 101 is closed due to a major landslide, this vital connection would be broken and the costs would be felt throughout the area; residents, travelers, and area businesses would be disrupted.

To quantify these impacts, Caltrans published an Economic Impact Study examining current costs and analyzing potential effects of an extensive closure of Highway 101. The entire report, completed in January 2015, is available in the Document Library. This 2015 study was then expanded in 2018 to include regional impacts to Humboldt, Del Norte, and Curry (Oregon) Counties.

A one-year full closure of Highway 101, caused by a landslide, could mean:

The Del Norte Coast is a unique coastal ecosystem that is home to old-growth redwoods as well as rare and threatened animal species. Redwood National and State Parks encompass a majority of the affected highway.

The area was designated an International Biosphere Reserve by the United Nations in 1983.

The southern portion of Last Chance Grade intersects with an area of cultural significance, designated as a UNESCO World Heritage Site.

The area is of particular importance to a number of Native American tribes that have maintained a presence in the region for centuries.

The UNESCO website describes the cultural significance of this site:

“Archaeological surveys, test excavations, research and consultations conducted over the past 20 years have resulted in the recording of 50 prehistoric archaeological sites, 19 historic sites and at least 21 places of significance to local Indian communities. The archaeological sites span 4,500 years and represent changing settlement and subsistence systems. Historic resources include examples of early trails, homestead and ranching, fishing, dairy, mining and logging industries, and military structure.”

Caltrans continues to maintain and repair the highway at Last Chance Grade. Heavy rains in March 2016, and later in the winter of 2017, resulted in multiple storm damage issues including cracks and settling on the roadway, deformation of retaining walls, and a localized landslide that resulted in the temporary loss of the southbound lane at postmile 14.4. In April 2017, the FHWA approved funding of $27.6M in construction dollars to repair this storm damage. The scope of work includes repairs of retaining walls and construction of new retaining walls. Construction crews will also improve vertical settling to smooth out the ride. This repair work began in the summer of 2017, using emergency contracts.

This Emergency Opening project located near post mile 15.3 was designed to slow the movement of a slipout within the larger Last Chance Grade slide complex, to protect an existing wall completed in 2010 from further damage, and to reduce the frequency of repairs and delays to the traveling public. This $4.8 million (budgeted) project was completed in November 2013. The project included drilling 27 piles at a maximum depth of 80 feet for a soldier pile ground anchor wall, reconstructing portions of the roadway surface, and repairing drainage facilities damaged by the slipout.

An Emergency Soil Nail project at post mile 15.0 was completed in spring 2012.

Because of the March 2011 Federally Declared Storm Event, a slipout occurred that resulted in the failure of a portion of roadway shoulder, and loss of embankment fill below the roadway. The repair at this location consisted of construction of a soil nail wall. Construction was completed in the 2018 season.

The location of this project is the same location where a soil nail wall was constructed to prevent loss of the roadway in 2012. The purpose of this project was to regain roadway shoulder width that was lost during the March 2012 storms. This was accomplished through construction of a Soldier Pile Ground Anchor Wall in front of the soil nail wall that was constructed in 2012. Construction began in 2016 and was completed in the 2017 season, however Caltrans identified further damage to the north and south of this wall and began increasing the length of this newly completed wall. The southern and northern extensions of this wall were completed in 2019.